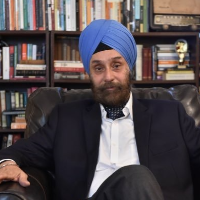 Navtej Sarna is a former Indian diplomat as well as an author and columnist.
Ambassador Sarna’s last diplomatic appointment was as India’s Ambassador to the United States during 2016-18, when he guided India’s engagement with the US during th...Read More

Navtej Sarna is a former Indian diplomat as well as an author and columnist.
Ambassador Sarna’s last diplomatic appointment was as India’s Ambassador to the United States during 2016-18, when he guided India’s engagement with the US during the first two years of the Trump Administration. Some of the significant developments in bilateral relations during his tenure were the successful visit of Prime Minister Modi to Washington DC, the first 2+2 Dialogue (State and Defense) between the two countries, the deepening of the Major Defense Partner status for India, and so on.

Sarna earlier served as India’s High Commissioner to the United Kingdom at the time of the Brexit referendum. From 2008 to 2012, Sarna was India’s Ambassador to Israel and contributed significantly to the maturing of this critical relationship. Earlier in his career, Sarna served in various bilateral and multilateral diplomatic capacities in the Soviet Union, Poland, Bhutan, Geneva, Iran and Washington DC.

Ambassador Sarna has also held several crucial positions at the Foreign Office in Delhi. He has the distinction of being the longest serving Spokesperson for India’s Foreign Ministry from 2002 to 2008.

As the Special Secretary in charge of International Organizations, anchoring India’s Presidency of the UN Security Council.

As Secretary (West) during 2014-2015 he was the top official responsible for India’s relations with 95 countries. Ambassador Sarna led the Indian team for hosting the Third India Africa Forum Summit in New Delhi.

Navtej Sarna is also an established author of fiction and non-fiction. His works include the novels The Exile and We Weren’t Lovers Like That, the short story collection Winter Evenings, non-fiction works The Book of Nanak, Second Thoughts and Indians at Herod’s Gate, as well as two translations, Zafarnama and Savage Harvest. He has been a regular contributor to several Indian newspapers and journals as well as to the Times Literary Supplement, Financial Times (UK), London Magazine and the BBC.

Ambassador Sarna is on the Governing Council of the ShriRam College of Commerce, Delhi University and holds several memberships including that of the India International Centre, India Habitat Centre and the Delhi Gymkhana Club. He is also the Patron of the Khushwant Singh Literary Festival in London.