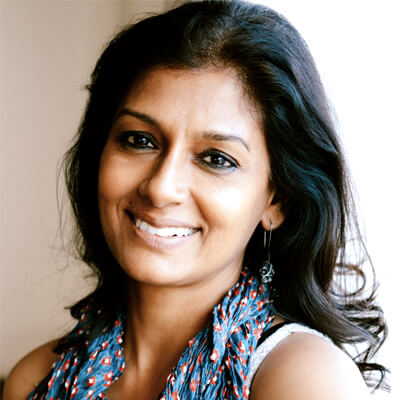 Nandita Das has acted in more than 40 feature films in 10 different languages. She made her directorial debut in 2008 with Firaaq, which won many accolades and appreciation, both in India and abroad. She was on the jury at the Cannes Film Festival twice (2005 and 201...Read More

Nandita Das has acted in more than 40 feature films in 10 different languages. She made her directorial debut in 2008 with Firaaq, which won many accolades and appreciation, both in India and abroad. She was on the jury at the Cannes Film Festival twice (2005 and 2013), among others.

Nandita also wrote, directed and acted in the play, Between the Lines, in 2012, that dealt with the subtle gender inequalities that exist in educated urban couples. She has a master’s degree in Social Work and has worked with various NGOs before films gave her a wider platform to expand her role as a social advocate.

Nandita continues to remain a strong voice for issues of social justice and human rights. She has been invited to speak at some of the best universities, global and national events and important social forums around the world. She has been the President of the jury in 2018 and 2020 edition of the UNESCO-Madanjeet Prize for the Promotion of Tolerance and Non-Violence.

Nandita Das was the Chairperson of Children’s Film Society from 2009 to 2012. She has been conferred the ‘Knight of the Order of Arts and Letters’ by the French Government. She was the first Indian to be inducted into the Hall of Fame at the International Women’s Forum in Washington DC. In 2010, she was nominated by the World Economic Forum to be a Youth Global Leader. Nandita Das was among the 16 applicants, chosen from close to 4000 applicants, to be a Yale World Fellow in 2014.

She has been a staunch supporter of the campaign, ‘Dark Is Beautiful’ that has been fighting the rampant colour bias. In 2019 she produced a music video, India’s Got Colour with many celebrated actors, to further the conversation on diversity of skin tones. Nandita's second directorial venture, Manto, based on the life and works of the short story writer, Saadat Hasan Manto, premiered at the Cannes Film Festival in 2018.

It was the only official Indian film to be selected in competition and then travelled to various festivals around the world. Nandita also screened the film and shared its journey at top US universities including Stanford, Yale, Harvard, MIT and Columbia. Manto continues to stream on Netflix.

Her first book 'Manto & I' chronicles her 6-year long journey of making the film. Both were co-produced by Nandita Das Initiatives (NDI), a company she set up to explore creative ways to tell compelling stories. In May this year, she wrote, directed and acted in a short film called, Listen to Her. The 7min film, produced by NDI, is about the increase in domestic violence and overburden of work that women are facing during the lockdown. It was supported by UNESCO, UNFPA, UNICEF, UN Women and South Asia Foundation and can be freely watched on Youtube.

Other Videos of Nandita Das