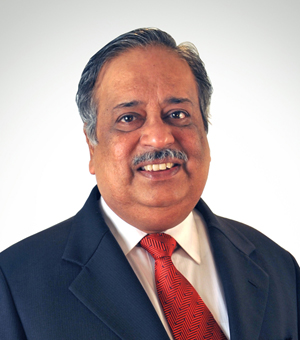 Meleveetil Damodaran, has, in a career spanning over 40 years, worked with the Union and the State governments in India, regulatory bodies, investment institutions, banks, development financial institutions and with the private sector. He has held regulatory and deve...Read More

Meleveetil Damodaran, has, in a career spanning over 40 years, worked with the Union and the State governments in India, regulatory bodies, investment institutions, banks, development financial institutions and with the private sector. He has held regulatory and developmental positions in the Government and in India’s financial sector, before demitting office as Chairman, Securities and Exchange Board of India (SEBI) on February 18, 2008. He graduated with distinction in Economics and in Law from the Universities of Madras and Delhi respectively. After a career spanning several regulatory and developmental assignments in the state of Tripura, he was appointed as its Chief Secretary in 1992, the youngest ever in the country to hold such a position in any State Government. During his tenure when he also functioned as Chief Electoral Officer, Tripura held statewide elections without a single instance of repolling in a State which had seen more than 100 election related deaths in the run up to the previous election. He also led the State’s transformation from an entity that could not pay salaries in time, to an overdraft free State that was recognized for fiscal discipline. This effort led to the State government receiving additional central financial assistance as an incentive for excellent resource management. Thereafter, he worked as Joint Secretary in the Ministry of Finance, Banking Division, for five years, dealing with Government’s ownership functions of Public Sector Banks and being its interface with Reserve Bank of India (RBI), the regulator of India’s banking system. The first set of public issues of shareholding in the Government owned banks took place in his tenure. Thereafter, as Officer on Special Duty with RBI, he co-ordinated the revival plans for three identified weak public sector banks, Indian Bank, UCO Bank and United Bank of India, the closure of which had been recommended by CII in a report on banking. In 2001, he was appointed the Chairman of Unit Trust of India (UTI) to rescue India’s largest and oldest investment institution which had collapsed. His restoring of UTI to health and strength is widely acknowledged as the most successful turnaround story in India’s Financial Sector. An institution whose obituary had been written was restructured as India’s largest mutual fund with exemplary governance practices being put in place. He was simultaneously given charge of Industrial Development Bank of India (IDBI), another of India’s major financial institutions, which too was restructured by him in an innovative manner, pulling it back from the brink, transforming it to a bank, and merging it with another commercial bank. The unique Stressed Assets Stabilisation Fund (SASF) which helped clean IDBI’s books was his creation. This cash neutral approach to cleaning the asset side of the bank books enabled IDBI to retain its credit rating. As Chairman SEBI, he brought improved practices to India’s securities market. He is widely acknowledged as one of the India’s foremost champions of Corporate Governance. During his tenure he introduced QIP, a new instrument for follow-on offerings in the Indian Market. This instrument prevented the continuing export of India’s capital market. During his tenure at SEBI, he was elected Chairman of the International Organization of Securities Commissions (IOSCO)’s 80 member Emerging Markets Committee for two years. In 2007, he organized, for the first time in India, the annual conference of securities markets’ regulators from all over the world. This conference is even now spoken of as the best annual conference that IOSCO has ever organized. He is presently an Independent Director on the Boards of Hero MotoCorp, Tech Mahindra, Larsen and Toubro, Biocon and CRISIL. He is the Non-Executive Chairperson of InterGlobe Aviation (IndiGo). He is a Nominee Director on the Boards of Bajaj Allianz General Insurance Company and Bajaj Allianz Life Insurance Company. He was also Advisor and Chief Representative in India for the ING Group of Netherlands. He is the founder of Excellence Enablers, a specialist Corporate Governance initiative that focuses on improvement of Board performance and addresses coaching and mentoring needs of corporate India. He chaired the Government of India constituted Taskforce for setting up Resolution Corporation of India. He is a member of the Advisory Board of BML Munjal University. He was the Chairman of Ministry of Corporate Affairs Committee for Reforming the Regulatory Environment for doing Business in India and Chairman of Reserve Bank of India’s Committee on Customer Service in Banks. He was the founder Chairman of the Society and Board of Governors of the Indian Institute of Management Tiruchirappalli (IIMT). As one of the foremost advocates of Corporate Governance in India, he advises on improving Board performance. He chaired the Taskforce on Corporate Governance constituted by Federation of Indian Chambers of Commerce and Industry (FICCI). He has been a recipient of several prestigious awards for leadership, transformation and Public Service. He is also regular on the public speaking circuit. He chaired FICCI Industry Insurance Awards (2019), FICCI Healthcare Excellence Awards (2019, 2018 and 2013), Assocham Capital Market Intermediaries Excellence Awards (2017), EY Entrepreneur of the Year (2017, 2010 and 2009), FICCI CSR Award (2015-16), FICCI Higher Education Excellence Awards (2016 and 2014), ET Now Leaders of Tomorrow Awards (2013), Business Standard Banker of the Year (2011-12), Outlook Money Awards Jury (2010 and 2011) and NDTV Mutual Funds Award Jury (2010) and being a part of the Jury of BML Munjal Awards (2015), IBN7 Diamond States Award (2011) and FICCI Healthcare Awards in 2009, 2010 and 2012. His people management skills deriving from a high emotional quotient have been captured in the book “In Search of Change Maestros (Sage Publications)” authored by Dr. Pritam Singh and Dr. Asha Bhandarker.

Damodaran Sir's session was very insightful about the latest in the world of finance and his experiences from leading SEBI and major banks.

Other Videos of Meleveetil Damodaran

Fr. President & Member of the Board of IndiGo