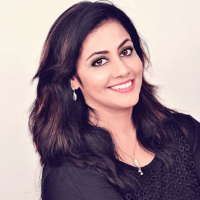 Founder-Director - DRZYA – India’s only organisation that works in the space of diversity and inclusion through multiple modes which include entertainment; learning and unique experience

As an Inspirational Speaker, Ms. Geeta has spoken on prestigious platforms like TEDx, Western India Football Association, Public Relations Council of India, Citizens Vigilance Forums, Indian Institute of Management, Ahmedabad, Indian Institute of Business Management, Mumbai, Global SHRM Conference in New Delhi etc. Her USP is her ability in engaging the audience giving them a personalized experience. Ms. Geeta is known for her empathic speaking where she uses the right emotions needed in creating an impact.

As a former Government officer, Ms. Geeta has worked in Indian Audit and Accounts Department (C&AG of India) for 21 years travelling across India focusing on performance of premiere organisations of India. She was among those chosen for United Nations - World Food Program Audit in Western Africa which took her to poverty-stricken countries like Senegal and Niger enhancing her exposure of conditions and challenges prevailing there.

Further broadening her experience of various sectors of the society, Ms Geeta even dabbled in acting. As an ACTRESS, she acted with lead actors of the South Indian film and TV industry where her performance was appreciated by media. She is also seen in one of the Nerolac paint ad with Shah Rukh Khan, the king of Bollywood.

Her speaking talent came to the fore where as an ANCHOR, she hosted every conceivable format of speaking - be it intellectual events like the first Gateway Litfest where she shared stage with literary stalwarts across India or award events or international assignments. She has over 500 such assignments to her credit which further broadened her world vision and lifestyles.

Ms Geeta continues her stint of making a difference by creating socially relevant organisations like DRZYA and DRZYASHAKTI Trust. These organisations contribute in creating positive impact on multiple sectors of the society viz. corporate, students and public at large. To date she has through her organisations influenced the mindsets toward empathy among lakhs of people.

Her speaking assignments have covered variety of topics which include Women leadership; Diversity and Inclusion, Empathy among medical and healthcare personnel; Life and goal setting; Prevention of sexual harassment at workplace; Personal Presence enhancement; Vigilance in daily life etc.

Other Videos of Geeta Poduval

Bringing Balance in the World through Education, Entrepreneurship and Empowermen...