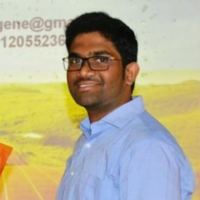 I am a determined Data Engineer from Wipro Technologies, with an inquisitive
nature to learn more on the job everytime.As a volunteer of IEEE SIGHT, which is
a special interest group that works on Humanitarian Technologies. I lead the team
of vib...Read More

I am a determined Data Engineer from Wipro Technologies, with an inquisitive
nature to learn more on the job everytime.As a volunteer of IEEE SIGHT, which is
a special interest group that works on Humanitarian Technologies. I lead the team
of vibrant volunteers and strengthen their skills, by strategizing their abilities in a
coherent way. This has brought various laurels to our team turning out to become
the Winner of the IEEE Education Activity challenge in the Asia Pacific Region
in which teams from 18 countries participated.

The SIGHT and the Smart village banner of IEEE has recognized the initiatives,
which has steered global appreciations. As an organizer, of the field visits to the
villages across the state has impacted the lives of many rural people. To cultivate
the societal thinking among the multi-generational troops of the present times, I
stimulate thousands of live audiences in my Motivational Sessions at a variety of
Universities, Organizations and conferences in India and Abroad.

What I love to convey to the current generation?
Many people have passionate thoughts in their mind. They think about the path to
reach their destiny, the track to attain true happiness and the way to solve a social
problem. But those thoughts remain undisturbed for years. At times, these thoughts
would sparkle them to share a few words with their friends, family and in social
media. My talk would give birth to those thoughts and words by persuading them
to take the right set of actions.

What impact do people have on hearing me?

Everybody thrives to grow in life. They wanted to upskill their talents for
something better. But in the due course of focusing on the improvement, people
end up forgetting to use what they already possess. But the fact is improvement
happens only with implementation. My talk would stir up people to use their
innate skills for their betterment. The barrier of channelizing their talents is a great
challenge would provide a breakthrough in their minds. My session would make
the attendees understand that there are thousands of people who awaits for their
talents. It would enable the audience to bridge the demand and supply skill gap that
is present in the society. I believe such bridges would also have a way to connect
the Urban and the Rural community thereby contributing to a sustainable
development.

My speaking Engagements in IEEE & Other Organizations:

? Handled a 'Career Enhancement program - with psychological keys' at SA
Engineering College on March 8,2019 organized by the Dept of Electronics and
Communication Engineering.
? Inspired around 400+ fresher’s of Engineering the IEEE induction program on
Jan 25,2019 at the event titled 'Know Your Purpose'.

? Motivated the Students from more than 10 Colleges at the Students and
Professionals Awareness Conference on the topic 'Networking with Humanity At
SSN College of Engineering, Chennai on January 5th,2019.
? Organized a technical meeting and hosted Mr.Vijay Anand,Asst.Vice-President
of Aricent Technologies on the topic 'Interoperability Challenges in IoT' on Dec
2,2018.
? Was a delegate at the Region 10 - Asia Pacific Conference organized by the
Institute of Electrical and Electronics Engineering which had delegates from
around 30+ countries at Hotel Prime Plaza at Bali,Indonesia on Sept 15-18,2018.
? Trained the teachers across the districts of TamilNadu on the event titled
'Training of Teachers' - TOT at the TamilNadu UESI camp centre Trichy,14th
June,2018.
? Delivered a talk on 'Know-how about Presentations and the benefits of it' at
Jeppiaar Engineering College, Chennai organized by the Student branch on July
14th,2018.
? Handled a motivational session titled "Be Your Best Version" at Bishop Heber
College which was organized by the Evangelical Union of Tamilnadu, Trichy on
May 13th ,2018.
? Delivered a lecture on “Psychology in Professionalism” at an event organized
by the IEEE Student Branch of Jeppiaar Engineering College on Dec 12,2017.
? Was the Track Chair of the Humanitarian Activities at the IEEE Madras
VoLT(Volunteer and Leadership Training Program) organized by the IEEE young
professionals at Karya Working Space, Mylapore on Dec 10,2017.
? Handled a session on "Overview of Social Media and Relationship "for about
800 students at Mount Zion Matric. School,Puddukottai,Trichy,TamilNadu on Nov
26,2017 organized by Evangelical Union.
? Was the invite Chief Guest at K.RamaKrishna College of Engineering ,Trichy
on an event titled 'Dreams of Dr.APJ.Abdul Kalam',organized by the Craters Club
on November 10,2017.

? Delivered a talk on “Networking with Humanity”, at the IEEE Tirunelveli Hub
Congress, Kalasalingam University on Sept.22-23, 2017.
? Provided a talk on "Know Yourself" as a Distinguished Speaker at the Women
in Engineering Leadership summit which was organized at Kuala
Lumpur,Malaysia,Sept 18-19,2017 by the Institute of Electricals and Electronics
Engineering.
? Was the Track Speaker at the IEEE Chennai Hub Congress at Hindustan
University on Humanitarian Benefits of IEEE PES and IEEE SIGHT , Aug
31,2017.
? Had been an invited Speaker at a guest lecture titled “Awareness on
Technology-IEEE”, at CK Engineering College and Technology ,Cuddalore on
August 28,2017.
? Delivered a Motivational Talk for the freshers - SPARK 17 at Indra Ganesan
College of Engineering, Trichy on June 20,2017.
? Was the Keynote Speaker at the Two days IEEE orientation program at Jeppiaar
Engineering College, Chennai,April , 2017
? Handled a session on Banking for the villagers of Manamathi area in
association with the Rotaract Club of JEC , Chennai, March, 2017
? Provided a Motivational Talk for the orphan children at New Life New Hope
Organization Chennai on Dec 7,2016.
? Delivered a Session on Humanitarian Technologies in IEEE- International
Symposium on Technology and Society at Uday Samudra Leisure Hotel (UDS),
Trivandrum, Kerala, India, during 21-22 Oct 2016.
? Delivered a Seminar on Internet of Things and its Application in Robotics at
Jeppiaar Engineering College,Chennai on September 9,2016.
? Has handled a session on Motivation and Robotics at Government Higher
Secondary School, Ariyalur ,Trichy Dist on November 30,2015.

Bestselling author of Asura and Screenwriter for Bahubali series