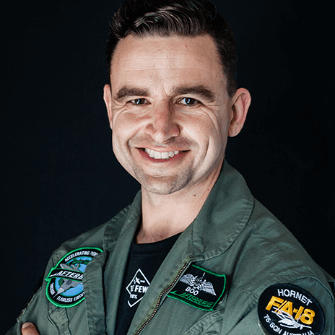 Inspiring, motivating, insightful, charismatic, powerful, surprising and a ball of energy are some of the ways Boo’s high impact keynotes have been described! He brings the same professional and goal-oriented approach instilled in him as a fighter pilot, to the...Read More

Inspiring, motivating, insightful, charismatic, powerful, surprising and a ball of energy are some of the ways Boo’s high impact keynotes have been described! He brings the same professional and goal-oriented approach instilled in him as a fighter pilot, to the professional manner in which he delivers his programs.

Boo’s programs are tailored to each specific event and he demonstrates his customer-centric mindset through his mission: To ensure your event is exciting, memorial and drives a genuine lift in your people's performance long after his keynote.

Only 400 single-seat fighter pilots have been trained in Australia in the last 40 years, more people have played test cricket for Australia. Less than 1 in 10 start-up businesses survive beyond a year. Boo has achieved success with both.

Today his passion is helping people, not just as individuals, as groups of high performing individuals in high performing teams. Over five years Boo has worked with some of the world's biggest companies, from Microsoft and VMWare, to BHP, Citibank and McDonalds. Focusing on optimising the performance of each individual from the frontline to the corporate office.

Boo really started his career as a speaker over 25 years ago, as a mission commander in the Royal Australian Air Force leading 100’s of men and women on complex missions where the margin for error is only 5 secs, all while travelling in excess of 1,500 km/h! He has refined his craft over the past five years as a professional speaker in front of audiences ranging from 40 – 4,000 and his keynotes are some of the highest-ranked on Google globally.

His successful fighter pilot career was tragically cut short after being diagnosed with a rare auto-immune disease Ankylosing Spondylitis. Confronting this significant life challenge Boo made a decision to leave his young family and start a business in war-torn Afghanistan called CTG Global, today one of the world’s largest humanitarian project support companies.

With one successful business behind him, Boo applied the skills learned as a fighter pilot to subsequent business ventures including record-breaking hotel development, a published author, magazine publisher, and today he pursues his true passion as the Australian partner of the world-class consulting group, Afterburner and co-host of "The Few" Podcast.

Organizations who engage Boo are looking for credibility and authenticity. Discussions around an organization’s performance can be challenging and Boo’s unique perspective on the execution mindset allows everyone in the organization to look at their performance through a fresh set of eyes and walk away with a genuine belief that maybe things can be done just a little bit better.  How does Boo know?

Boo will inspire your team by sharing his insights into the high-performance culture he experienced as a fighter pilot, the importance of agility in business and reinforce the characteristics of integrity, humility and determination to become an effective leader. The same skills he has honed over 25 years as a fighter pilot, successful businessman and entrepreneur - Boo believes approaching everything you do the same way a fighter pilot does will ultimately equip you for great success and he lives by the motto - you don't have to be a fighter pilot to think like a fighter pilot!

Other Videos of Christian "Boo" Boucousis