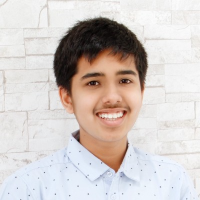 Ayush Chopra started his journey from Ahlcon International School, India as a young advocate for United Nations, 17 Sustainable Development Goals when he was 13 years old. He is now studying in Grade 12 at Rick Hansen Senior Secondary School, Mississau...Read More

Ayush Chopra started his journey from Ahlcon International School, India as a young advocate for United Nations, 17 Sustainable Development Goals when he was 13 years old. He is now studying in Grade 12 at Rick Hansen Senior Secondary School, Mississauga, Canada. Ayush has been recognized with the highest accolade a young person can achieve for social action or humanitarian efforts – The Diana Award. He has been acknowledged as one of the Most Influential Young Change Makers around the world. The Diana Award is the longest-running award given to the outstanding young people for selflessly creating and sustaining positive social change in memory of Diana, Princess of Wales, UK.

Ayush is the Founder of ‘SDGs For Children’ a unique platform for children across the globe to CONNECT, CREATE and COLLABORATE for a better and sustainable world. SDGs For Children is incorporated under the Canada Not-For-Profit Corporation Act to support Agenda 2030 globally.

Ayush is one of the pioneer Indian ambassador for the TeachSDGs project, initiated by the Global Goals Education Task Force, a volunteer-based worldwide network of teachers established in 2017. He is the only Student Ambassador among the first group of over 100 distinguished global educators. He has also been a Student Ambassador for various other global projects like SOS4LoveProject, Climate Action, Goals Project, and Looking 2020, Socio Story, Kindness Project, etc. Ayush is also appointed as the AFI (Ariel Foundation International) Youth Ambassador and their Youth Representative at United Nations.

Ayush was invited to represent India when he was 15 years old as the Indian Youth Ambassador at the 14th Annual International Human Rights Summit, staged from August 24-26, 2017 at the UN headquarters, New York. His speech on Human Rights at the UN received a standing ovation from the distinguished gathering.

Ayush is the author of “Shaping A Fairer World with SDGs and Human Rights”. The book is the culmination of his experiences, initiatives, and intense involvement in social transformation. The book graphically disseminates information about SDGs and Human Rights with engaging design and artwork. The book is now being used as daily reference guide for teaching United Nations Sustainable Development Goals in many of the classrooms across various countries.

Ayush also has his own Podcast– ‘Shaping A Fairer World’. The Podcast is an attempt to connect Educators, Students, and Parents together and to share their voices and unheard stories across the globe.

Ayush believes, “Nothing can stand in the way of the power of voices calling for CHANGE.”