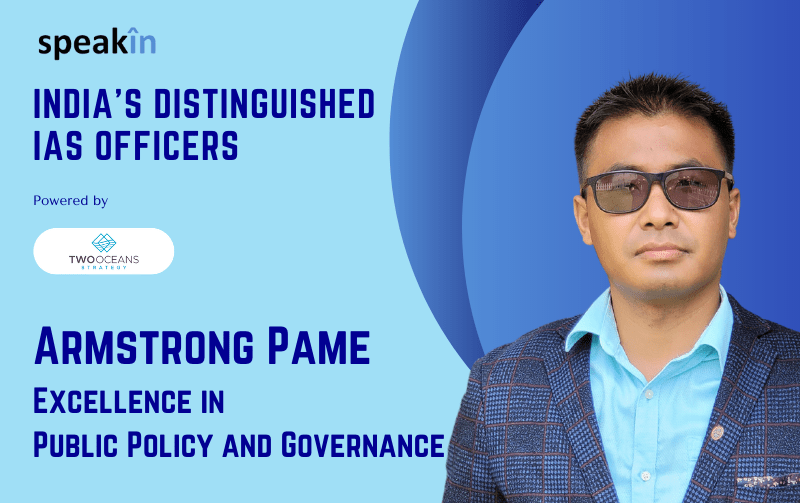 Armstrong Pame is the first member of Nagaland's Zeme tribe to become an IAS officer, earning the nickname "Miracle Man" for creating a 100-kilometre road connecting Manipur to Nagaland and Assam in a remote part of the hills state of Manipur without any government assistance. Pame is a sign of transformation and has delivered joy to the people of Tousem, a Manipur subdivision deemed one of India's most backward regions, by providing them what they wanted most — a motorable road that joins them to the outside world.

Armstrong Pame is from Impa village in the Tousem Subdivision of Manipur's Tamenglong district, where there is no road except for the British bridle trail that connects his town to Tamenglong. He is a member of the Zeliangrong community's Zeme speaking group. His elder brother Jeremiah Pame is a Lecturer in the department of English at Delhi University. His two elder sisters Pourei and Ramning, and his nephew Simon gave all they could to see him today. Armstrong Pame attended United Builders School, a town school in Tamenglong, Manipur, till he completed grade ten. He transferred to St Edmund's College in Shillong, where he finished his class 12 studies. He earned his bachelor's degree in physics from Delhi's elite St Stephen's College in 2005. He had always wanted to study here and realized another childhood dream – to be an IAS officer. Armstrong Pame appeared for the Civil Services Examination in 2007 and got Indian Revenue Service (IRS) in the Custom and Central Excise department. He got Indian Administrative Service (IAS) in 2008 when he succeeded 24 years by giving his second attempt.

The 2009 batch IAS officer was struck by the condition of the people when he observed how they had to walk for five hours to reach Tamenglong, which was only 50 kilometres distant, after crossing a river and then a length that could hardly be considered a road. Armstrong Pame arrived in Tamenglong in 2007 after passing the IAS exam. Since he had seen hardship in his childhood, he decided to visit 31 villages of Manipur on foot to see how the people lived, and he recounted the incident that led him to launch the 100-km road. He became Tousem's SDM in 2012. He visited numerous villages and witnessed how people carried sacks of rice on their backs, walked for hours, and had patients on homemade bamboo stretchers due to the lack of motorable roads. The villagers wanted a roadway when he asked what they wanted him to accomplish for them. Then, with the help and assistance of the local people, he began construction of the iconic "People's Road," which connects Manipur with Assam and Nagaland. Starting with his salary and family's savings, his effort pulled together resources and contributions from all across the world through social media platforms. Pame is an ardent advocate of mainstreaming the North East region with the Indian mainland. He emphasizes on how educational institutions contribute to the neglect of northeastern people. According to him, children will understand the Northeastern region and culture of their country better if the educational system makes an effort to cover them by including stories in textbooks, regardless of the Boards to which they belong. This is how, he feels, people will stop seeing them as outsiders. He also believes that it is high time for the media and Bollywood to begin giving the Northeastern people equal representation. The coverage of current events in North-East India, irrespective of their severity is negligible. Most of the mainstream press doesn't even have their respective reporters present in the region. Pame also feels that if Bollywood makes a biopic about someone from the North-East, they should start hiring Northeastern actors.

Honouring his outstanding efforts to completely change the face of Manipur and his effective public service and vision for the region, SpeakIn recently recognized Armstrong Pame in the first edition of ‘India’s Distinguished IAS Officers’. He was conferred an award for excellence in Public Policy and Governance.

Watch the full video featuring Armstrong Pame sharing about his career, his personal life and some of his amazing achievements as a Civil Servant: WATCH HERE